Lioli out of CAF Champions League

Lioli crashed out of the CAF Champions League in the preliminary round yesterday despite a 1-0 second leg win over Vital’O in Bujumbura, Burundi. Tse Nala went into the game trailing 2-1 from the first leg two weeks ago.

Lioli put in a more urgent display yesterday than they did in the first leg at Setsoto Stadium where they were wasteful in front of goals.

Tse Nala were rewarded for their efforts with a Jeremia Kamela goal late in the first half.

However, Mosholi’s Mokhothu’s side was unable to get the winner in the second half. The scant consolation for Lioli is they are likely to get a quick opportunity to do better in the Champions League. Lioli are two points clear in the Vodacom Premier League and are in pole position to defend their league title.
Posted by MolapoSC at 11:00 AM No comments:

Their approach, an approach that is possession-centric, low on stress and very happy, is what has driven the club’s exploits over the past two years.

Of course, this would appear obvious to say, but the less obvious part is how Barça’s attitude towards the game maintains them physically and mentally.

It dawned on me last Thursday morning. 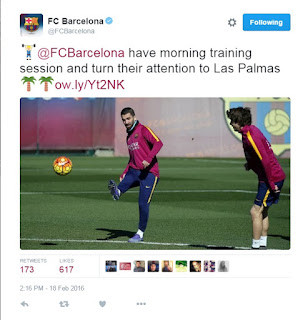 After beating Sporting Gijon the previous night, Barcelona players were in an early morning training session. This is a team that had just played its 16th competitive game since winning the World Club Cup in Japan on December 20; a team that had played away from home the night before.

But here was Barça, at training, doing rondos.

Barcelona’s approach to football is magnificent because lends itself to dominance, but the unsung beauty of what Barça is doing now is it doesn’t tire the players physically, or mentally, as such consistent greatness would reason to require.

In 1991, after four years of Arrigo Sacchi’s demanding football utopia, AC Milan’s players were spent and the coach himself worn out. As Aldo Serena explained later, everyone was drained after a period in which Milan won eight trophies including back-to-back European Cups.

“The players admired Sacchi and had understood his importance for their professional growth, but after four years we were quite stressed and exasperated by (Sacchi’s) concepts,” Serena said.

“There was a need for slightly less severe sessions, still tough, but a bit more enjoyable.”

So, here is Barcelona, another utopia but one seemingly on a totally different level on the stress scale.

Oftentimes we associate winning with sweat, strife and anger. These are all crucial elements, but perhaps the greatest of all is tranquillity, both physical and mental.

Barcelona are able to train more; remain fresh; go win a game; and repeat the cycle.

This is the genius of Barcelona and a credit to Luis Enrique who has fostered a relaxed spirit at the club.

He demands a lot of the players, but he has not been overbearing, a criticism he had during his time at Roma.

Enrique, a graduate of the Barça way, also demands perfection. However, is not a perfectionist as Pep Guardiola was, a genius who fell prey to the Sacchi syndrome towards the end of his Barça reign four years ago.

So, the Barcelona players are free to make mistakes and once in a while they will hoof the ball forward and scramble a goal like they did against Las Palmas on Saturday.
They will win the game, and that is why this Barcelona team is enjoying the longest undefeated streak in club history – 32 games.

Their whole style permeates a sense of freedom. They are happy; relaxation is more sought after than perfection.

Obviously the players do suffer; there is a lot of suffering that goes into 90 minutes of top level football. Barcelona still aim to press the ball high and win it quickly. This requires energy. They still have to defend, run and chase. This requires discipline.

But, more than anything, there is a lot of smiling in a Barcelona game.

If you are fighting wars all time you will get tired, I would suppose even training sessions don’t give you as much because you are beat up most of the time. Also, you expend so much that injuries become another opponent.

Heading into this past weekend, only Rafinha was on the club’s injury list with a raptured knee cruciate ligament that has kept him out since September. This is quite incredible considering Barcelona’s load of games and the level of competition they face.

And, it’s not just Barcelona that win.

What I mean is there are other teams winning games. Juventus, Bayern Munich and Paris Saint-Germain are winning weekly, Arsenal have also won a lot of games. But often there is either too much suffering (Juventus) or striving to attain some sort of footballing flawlessness (Bayern and Arsenal).

Maybe winning a treble the previous season helps. You perhaps have less to prove if you are Enrique and more margins for error if you are the players.

But, then, when I read that Lionel Messi, Luis Suarez and Neymar are the best friends in the history of football, it solidifies everything I am thinking.

This is just a very happy club. Because even though Barça are successful, someone should cry that he is not playing enough, someone should complain they are being played out of position and someone should sulk that they are not scoring as many goals as they would like.
Obviously, there are talent-specific things Barcelona do that no one else can. No one can dribble everyone and score like Messi. No one can escape six opponents on the centre circle and then provide a pin-point through-pass like Andres Iniesta.

But, I am thinking everyone can aim to be free when they play too, like the Golden State Warriors are doing in the NBA or New Zealand’s All Blacks did at the Rugby World Cup last year.

“It is amazing how much can be accomplished if no one cares who gets the credit,” the great John Wooden also said. That is Barcelona; that is Golden State; that is the All Blacks.

I may have gone off topic a bit, but this is a club setup worth acclaiming.

Barcelona are perfect by not being perfect. They amaze by having fun. Their style is loose and blissful and I figured this is another reason for their success, apart from their history, years of planning and transcendent talent.

Happy winning is the best winning and I just think we have never seen this kind of beast in the history of football.
Posted by MolapoSC at 3:00 PM No comments:

Defending champions Bantu will face LCS while Lioli meet LDF in the semi-finals of the LNIG Top 8. Bantu and Lioli booked their places yesterday while LCS and LDF followed suit today.

This afternoon’s ties, both played at the LCS Stadium, were close affairs following the same pattern as the first legs.

LCS advanced thanks to a hard fought win 1-0 over Likhopo to give them a 2-0 aggregate victory. The win is LCS’s sixth in a row in all competitions and they are the country’s form team. Their success has been based on a rock-solid defence. Masheshena have only conceded four goals in their last 12 games in all competitions.

In the second game today, LDF needed to a last-gasp goal to progress past Matlama with a 2-1 aggregate victory.

Most of the goals came yesterday.

Lioli overcome a spirited Sandawana 3-2 at the Maputsoe DiFA Stadium to win 7-3 on aggregate. Sandawana took the lead and had hope with the score tied at 2-2 midway through the second half but a penalty from Tumelo Khutlang sealed the tie for Tse Nala.

In yesterday’s other return quarterfinal, reigning champions Bantu had too much class for Likila United winning 3-1 at Setsoto Stadium for a 6-1 score over two legs.

The semi-finals will be played on Saturday, 9 April at Setsoto. The final will take place the following day.

Email ThisBlogThis!Share to TwitterShare to FacebookShare to Pinterest
Labels: LNIGTop8

By the end of the weekend, four sides will be through to the semi-finals of the LNIG Top 8.

Lioli will be looking to bounce back from last Sunday’s CAF Champions League disappointment when they meet Sandawana. Tse Nala head into the return leg holding a 4-1 lead from the first leg making them clear favourites to advance.

The match will also be played at the Maputsoe DiFA Stadium instead of Sandawana’s home in Butha-Buthe which would seem to eliminate any chance of a miracle comeback. Tomorrow’s game is the third time the teams will meet in under a month. Lioli also beat Sandawana 2-0 in the league three weeks ago.

Sandawana coach Bob Mafoso admitted it will be difficult to overturn the deficit they face.

“This is a knockout and there are no second chances. It will be difficult to come back from three goals against a team like Lioli,” Mafoso said.

In tomorrow’s other tie, reigning LNIG Top 8 champions Bantu host Likila with a comfortable cushion of their own having won 3-0 in the first leg. With the league title now out of A Matšo Matebele’s reach, their full focus will be on the LNIG Top 8. The match will be played at the Setsoto Stadium and not at Bantu’s Mafeteng home.

Sunday sees much closer affairs with LCS and LDF taking narrow 1-0 leads into their respective second legs against Likhopo and Matlama.

The two matches will be part of a double header at the LCS Stadium. In the first game, Likhopo will look to breach an LCS defence that has only conceded four goals in its last 11 games in all competitions. The weekend’s final second leg tie sees a clash of Lesotho’s two most successful teams, Matlama and LDF.
However, both are experiencing trophy droughts. Matlama haven’t claimed silverware since their league win in 2010 while LDF are without a trophy since they won the now defunct Buddie Top 4 in 2008.

The tie is evenly poised and the winner’s reward will be a likely semi-final date with Lioli.

Posted by MolapoSC at 1:00 PM No comments: